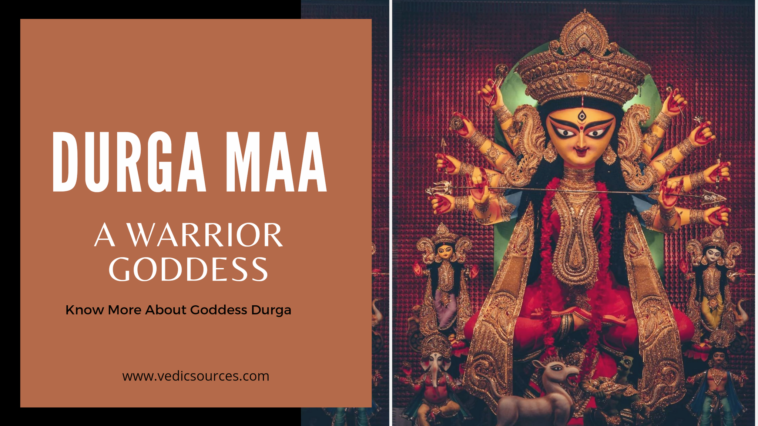 In Hinduism, Durga Maa is known as the Goddess of Strength and Justice. Her name means ‘invincible’ in Sanskrit. Therefore, she is considered to be the force that brings about order to the chaos and destruction we face in life. Goddess Durga also provides compassion, peace and appeases the mind of people filled with chaos.

Durga is a form of Shakti, embodying freedom from injustice, hatred, cruelty, ego, and all the sufferings of the world. She takes on the role of the Protector to her followers and is one of the most powerful gods in the Hindu religion. 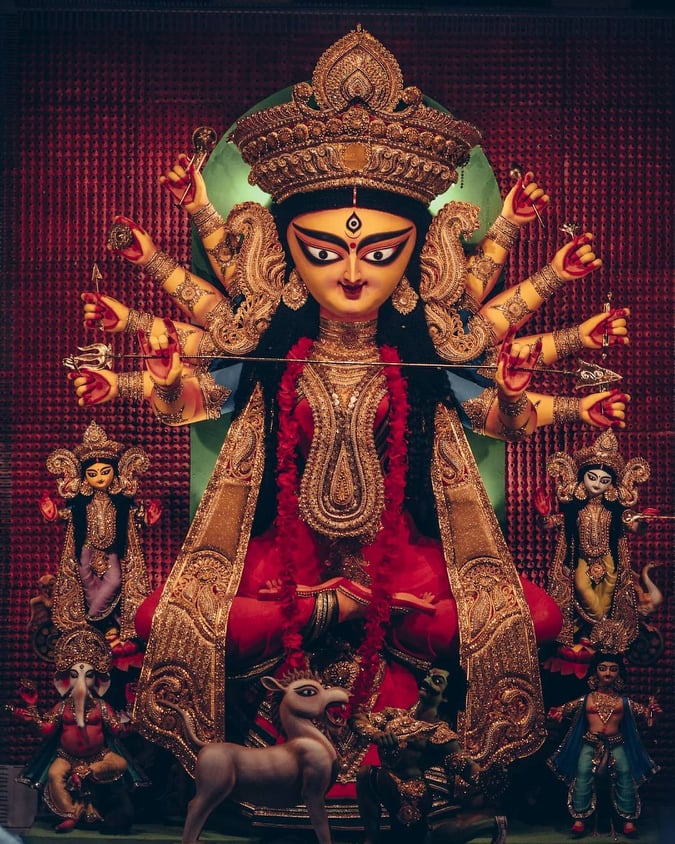 The origin of Goddess Durga begins in the Shiva Purna, where she is mentioned as divine female energy created by Brahman, Vishnu, and Shiva to fight Mahishasura.

Mahishasura, son of Rambha, is a demon who caused immense destruction to the Earth, by endangering the lives of men and God alike. He was considered undefeatable because he had defeated all the gods of heaven.

All these calamities prompted Lord Vishnu to create Durga, who would in turn defeat Mahishasura. Lord Vishnu dispelled a huge mass of light from his mouth which merged with the rays emitted from other gods. This mass of light morphed into what we now know as Goddess Durga.

She defeated Mahishasura and came to be known as a symbol for the destruction of evil, ridding the world from the tyranny of evil. Accordingly, she has been heavily associated with Justice and Protection.

She is often depicted wearing red clothes and having eight or ten hands. The red clothes are a symbol of the fierceness with which she fights evil. And the multiple hands represent the eight quadrants or the ten directions from which she protects her followers.

She holds multiple weapons in her hands gifted by the different gods. They are an indication of the large power she holds with which she defeats evil. Some of the weapons are the Trishul or Shiva’s trident, Sudarshana chakra of Vishnu’s discus, Brahma’s Kamandula, and Indra’s thunderbolt among others.

The lotus she holds is one of the most symbolic nature of Goddess Durga; it is called Pankaja. It symbolizes the evolution of spirituality among the evils in the world.

She also holds a conch in her hand which is said to produce the sound of ‘Om’, which is the sound of God in Hinduism. And she stands on top of the lion, or sometimes tiger which represents the immense power and determination with which she maintains these virtues in defeating evil. This bold pose of hers is called the Abhaymudra, meaning “freedom from fear.”

The Symbolic Representation of Goddess Durga

Durga Puja is a festival in which she is worshipped as the mother of Lakshmi, Saraswati, Ganesha, and Kartikeya. This festival is especially popular in Nepal and certain parts of India like West Bengal, Orissa, Bihar. She has been an integral part of the Vedas and as such has been worshipped since the beginning of times.

The Nine Forms of Goddess Durga

According to the Vedas, Durga Maa is worshipped in nine different forms; all these are different manifestations of her. On the festival of Navaratri, all the nine forms of hers are worshipped by her followers. The nine forms are as follows:

1. Sailaputri – Daughter of the Himalayas
2. Brahmacharini – Following Celibacy
3. Chandraghanta – Having the moon on her necklace
4. Kushmanda – Being the creator of the universe
5. Skanda-Mata – The mother of Skanda, Karttikeya, born out of her powers
6. Katyayani – The daughter of sage Katyayana
7. Kalaratri – Destroyer of Kali
8. Mahagauri – The wife of Lord Shiva
9. Siddhidatri – Blessing Siddhis and mystic powers 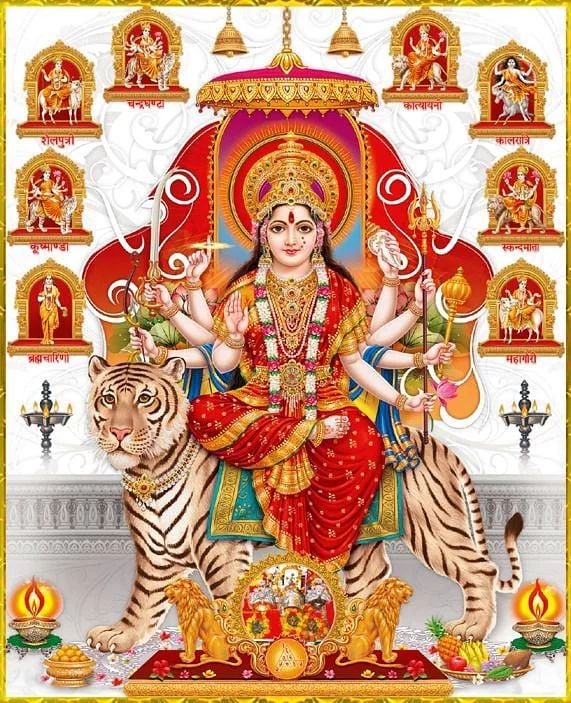 Goddess Durga is said to have many forms; she appears as Goddess Saraswati to grant wisdom to the sages, thereby ensuring the safety and welfare of the sages.

In addition, she was Mother Amba who accompanied Lord Vishnu as his female energy when he was in his divine form of Narasimha. Together, they saved Mahraja Prahlaad from the evil hands of the demon Hiranyakashyap. As Lord Vishnu defeated him by taking the personified form of death along with Goddess Durga, the followers of Hinduism, chant several mantras throughout the year, to awaken Durga Maa who is the personification of the active side of “Shakti.” However, this chanting of mantra is most prevalent during the festival of Navratri.

Recommended Read: Durga Mantra and Their Meaning and Benefits

She has a stronghold over her followers and among the gods as well. This is represented by the chant that says, “Shiv Yogi Tumhre Guna Gaven | Brahma Vishnu Tumhen Nit Dhyayeb”. This chant talks about how the Shiv Yogi sings chants of her and Lord Vishnu meditates on her as well. All these furthermore proclaim how powerful, respected and adored she is to the Hindu followers upon whom she has promised her protection and justice.

She is considered the divine form of meditation, prayer, bhakti, and guidance for all the people. The Durga Chalisa is a forty-line hymn that glorifies her and praises her conquest over the evil that looms over the world. It also praises her Vedic wisdom, and the mercy she bestows upon her followers on the earth.

She is loved and worshipped all over the world by her followers for the pillar of strength and protection she casts over them. 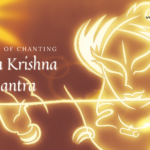 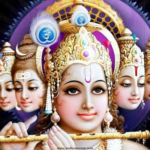