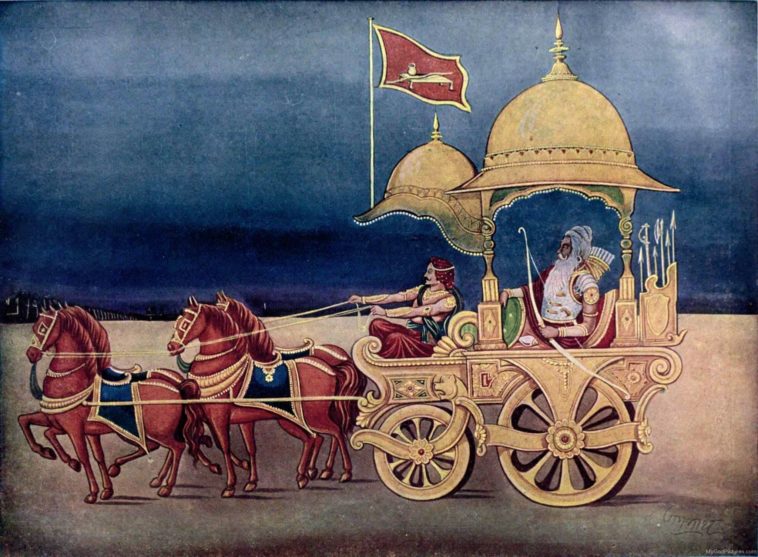 Guru Drona or Dronacharya was the hero of Mahabharata with knowledge and proficiency in various types of martial arts, including the art of wielding divine weapons. He is seen as a partial incarnation of Brihaspati, Guru of the gods. He is known to be the most powerful leader with unmatched value but had one flaw, he was highly gullible.
Guru Drona taught the Kaurava and the Pandava princes the arts of war. He had a favourite student who he adored more than his own son Ashwathama, Prince Arjun a Pandava prince. 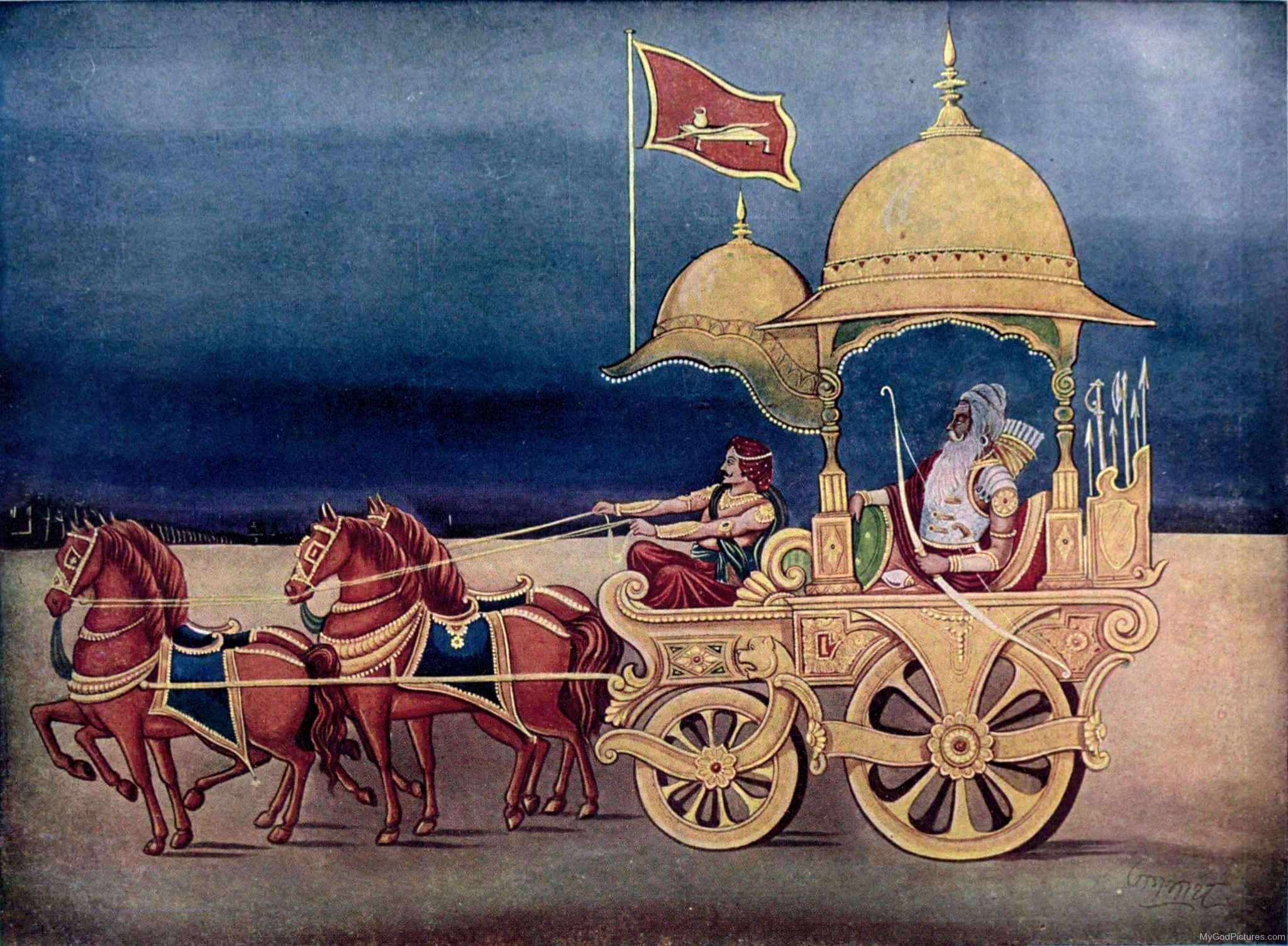 Let’s take a look at some major facts about Dronacharya to get to know him better:

Drona was born in a city (present day Dehradun) and was the son of Sage Bharadwaja. According to the legend, Sage Bharadwaja went to bathe in river Ganges one day. There, he met a beautiful apsara called Ghritachi and at the sight of her, the sage ejaculated collecting the seed in a vessel. Drona means vessel or born in a vessel thus this great guru was not conceived from a woman’s womb but in a vessel.

Guru Drona was married to Kripi and she gave birth to Ashwathama. Kripi is Kripa’s sister and like Drona, both of these siblings were not born through the womb. Kripa was a royal teacher for the princes of Hastinapur.

The Possessions of Parshurama

Parshurama had donated all of his possessions to the Brahmins. When Drona came to study with him, offered his body or his weapons to Drona. Drona chose weapons, coming to own all his divine weapons including the brahma staff, which was more powerful than the Brahmashtra.

Guru Drona wanted to move out of poverty. He remembered his friend Draupada (father of Draupadi) and asked him for help. Looking at their social difference, Draupada refused Drona embarrassing him and sending him away as a beggar.
Guru Drona then swore to make him pay and as Gurudakshina, asked his students to imprison Draupad. The Pandavas, led by Arjun defeated the king, tied him and brought him in front of Dronacharya. He only asked for what was promised, half of the kingdom and then freed Draupada. But Draupada then sought revenge and made a fire offering asking for a son who would kill Dronacharya thus the twins Draupadi and Drishtadumnya appeared.

Arjuna was Guru Drona’s favourite student with him imparting more knowledge to Arjuna than the other students. Drona predicted that he would become the greatest archer on the face of Earth. Arjuna was not only exceedingly talented but his devotion towards his Guru was extremely impressive. Thus, he gave this student the mantras to master the Invincible Divine Weapon Brahmashtra.

Eklavya was a prince of the hunting tribe, Nishada. He approached Dronacharya with the hope of becoming a great warrior by learning his skills. He was rejected guidance on the basis of his caste being lower but he did not lose hope. He picked a handful of soil that Guru Drona walked on and made it an idol. He then worshiped the latter and perfected his archery skills through years of unending practise. 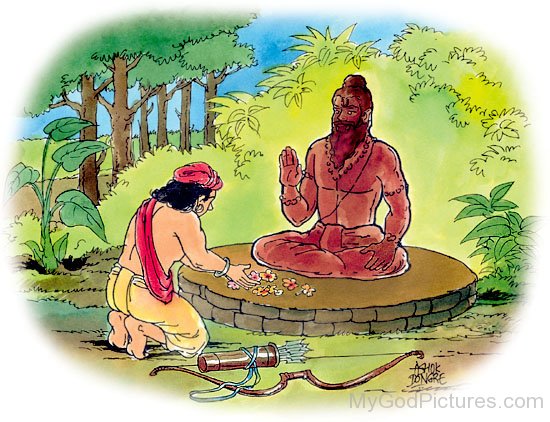 When Drona got to know about Eklavya’s skills, he decided to visit him. Eklavya showed Drona his idol and said, “You are my guru”. After seeing his archery skills, the guru worried that he would become a better archer than Arjuna. To solve this problem he asked the boy to give his thumb to Drona as the Guru dakshina (teacher’s fee). Being the devoted student that Eklavya was, he gave his thumb to the Guru without question.

Dronacharya was the guru of most of the warriors that fought against each other in the Epic war of Mahabharat. Drona’s adoration was with the Pandavas though he was compelled to fight from the Kaurava side. After Bhishma’s death, the Kuru army needed a chief and thus Drona was appointed as the commander in chief for a period of five days. Being the most able and powerful warrior, he killed thousands of Pandavas in the war.

In between the battle, Guru Drona planned to imprison Yudhishthira (the eldest of the Pandava brothers). To get this plan into action he asked for King Bhagadatta’s help who was the son of the great Asura Narakasura. Desiring to avenge his father Narakasura, who had previously been killed by Lord Krishna on the Pandavas’ side, Bhagadatta agreed to fight against the Pandavas. . Bhagadatta was the ruler of the kingdom of Pragjotish, located in the territory of modern Burma. But in spite of the help from the king, Dronacharya could not capture and make Yudhishthira a prisoner.

On the 15th day of the battle, as prompted by Dhritarashtra, Drona decided to use the powerful brahmadanda weapon. The brahmadanda is a highly divine weapon which possessed the power of the seven great sages. No one knew how to use this weapon, Drona was unbeatable that day. Looking at this situation, Lord Krishna thought up of a deceitful plan to defeat this powerful man.
According to Krishna’s plan, Bhima found and killed an elephant named Asvathama. Drona did not believe Bhima when he shouted loudly that Asvathama had been killed and went to Yudhishthira to know the truth. Very cunningly, Yudhishthira gave a confusing answer in Sanskrit that meant – Ashwathama died, be it a man or an elephant. But while he was completing his sentence, on Krishna’s order, the soldier’s blew into shells creating a sound which absorbed the last part of the phrase.
Believing that his son is dead, Drona gave up his arms, left the chariot, sat on the ground and closed his eyes. Seizing the moment, Dhristadyumna beheaded Drona. It is believed that by the time Dhristadyumna’s sword cut off Drona’s head but because of his meditation his soul had already left his body. Dronacharya’s death made Arjuna extremely sad as he had planned to save his admirable teacher’s life by capturing him.

These were the 9 facts about Great Drona’s life and about some major events of Mahabharata. 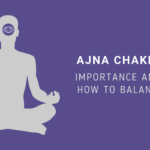 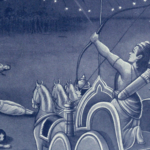