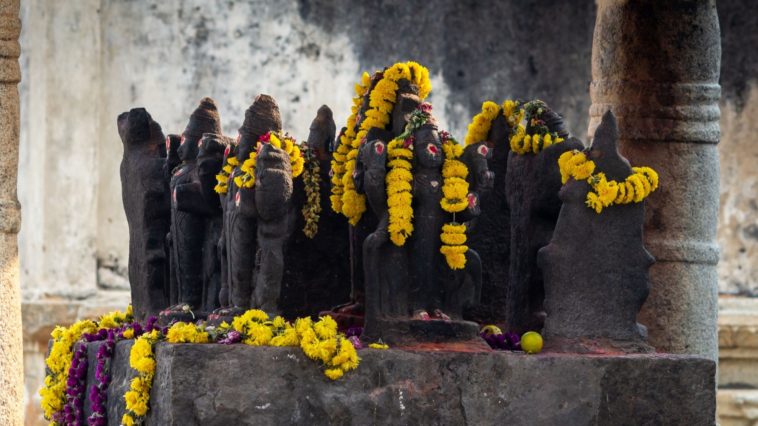 We are well aware of the fact that the planets in our solar system affect our lives astrologically in some way or the other. Each planet from the Navagraha, depicts a different segment in our life, a different vibe, and different energy. Some of the great saints in our history also understood their significance in our life. Few of them like Jaimini Rishi, Parashara Rishi, complied with the knowledge of light or heavenly body into Jyotisha Shastra, based on the Vedas.

The Jyotisha Shastra mentions the nine planets, collectively known as ‘Navagrahas’ and their effects based on zodiac signs. They are believed to have an influence on human life in Hinduism and Hindu astrology. The term ‘Nava Graha’ is derived from two Sanskrit words, ‘Nava meaning nine and ‘Graha meaning planet. There been times in everyone’s life when everything goes haywire without any plausible reason and we don’t get a clue, then one needs to look at the ruling planets and see how their movement is affecting us.

Graha means planet or controlling, seizing, grasping, or cognizing which is why it is associated with many other concepts including marriage. These planets have positive and negative effects on any individual personal and professional life based on their birth chart and planetary positions of their native planets.

Significance Of Navagraha in Hindu Astrology

According to Hindu astrology, every object in the Universe has its impact on others, including human beings and planets. Navagraha just doesn’t relate with planets, they produce specific vibrations in the cosmos and also relate to different parts of our body. They rule every different part of our psyche, our desires various needs that create who we are as a person. In our body, they facilitate the working of individual karma, while in the macrocosm, the unraveling of collective karma as well as the fate of the world. 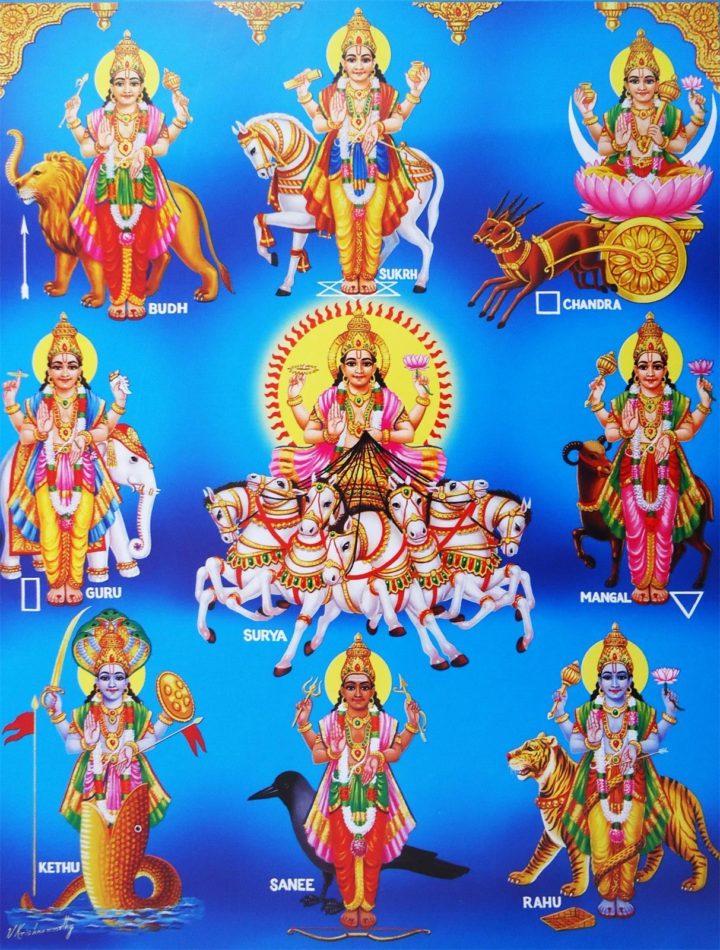 In Vedic astrology, only seven planets; Sun, Moon, Jupiter, Venus, Mars, Mercury, and Saturn are physically existing and are considered as actual planets. Rahu and Ketu are two physically non-existent planets. They are regarded as the Shadow planets or Chaya Graham’s. Each planet influences our lives according to the position on the Birth Charts.

Scroll down to find out more about each planet.

Surya is the Sun-god also called Ravi and he is considered the lord of all the planets and the most powerful of all the Navagraha. Riding on a one-wheeled chariot being pulled by seven horses representing the seven colors of the white light and seven days of the week is how he appears. It signifies strength, power, ego, leadership qualities, ambition, etc. Surya Namaskar is considered a good practice to have a healthy life.

Moon also known as Soma due to his waxing qualities is seen every time in the upper body with two hands holding one lotus each and riding a chariot led by 10 horses. It is the nearest Navagraha to the Earth and has so much power in our lives. It represents mother, nature, beauty, femininity, happiness, and mental stability. The white color represents purity, calmness, and innocence.

Mars is also called Angaraka, is the ferocious god with four hands. Also referred to as ‘hot planet’, he is the protector of Dharma. Mars is regarded as the military general of the Navagraha’s. He has his authority over courage, bravery, command over dire situations. In two of his hands, he holds a mace and a javelin in each and holds the other two hands in Abhaya and Varada mudra. Placement of Mangal in the 1st, 2nd, 4th, 7th, 8th, and 12th house of horoscope causes Mangal Dosha which brings about many malefic effects in human’s life.

Considered as one of the most powerful planets. Riding a chariot or a lion, Mercury has four hands, three of which are embellished with a sword, a shield, and a mace respectively, and the fourth one is held in Varada mudra. It has authority over one’s thought, speed of action, intelligence, logical skills, etc. So a person with strong Budha will have skills and knowledge in the fields like mathematics, logic statistics, communication, research, and poetry.

The wisest among the Navagraha’s, Brihaspati represents knowledge, wisdom, spirituality, power, good fortune, physical health, position, etc. Jupiter also called Brahmanaspati is the teacher of gods and is praised in many hymns in Rigveda. Riding a chariot pulled by eight horses, Jupiter has two hands, and the horses represent eight branches of knowledge.

Considered to be the teacher of demons, with love being his most powerful weapon. Generally shown with four hands seated in a silver or golden chariot with eight horses, three of his hands hold a staff, a rosary, and a vessel of gold respectively and the fourth hand is in Varada mudra. He is considered the giver of material wealth and prosperity.

Mythologically, Shani is the elder brother of Yama ( God of death). Shani is considered a dark planet, associated with challenging life events and suffering. He rides either a chariot or a buffalo, or a vulture, holding an arrow, a bow, and a javelin in three of his hands and holding Varada mudra in his fourth hand. This ghara signifies poverty, suffering, night, falsehood, misfortune, and loss. But Saturn is not bad. He is a teacher, he teaches through hardships and suffering. He symbolizes longevity, misery, grief, and old age. He rules over legs, muscles, joint bones, skin, hair, knees, etc.

Rahu also considered as a North node can be seen generally riding a dark lion. It is said that he swallows the Sun and the Moon causing an eclipse. He signifies fears, desires, obsession.

The name literally means a comet. He is depicted as a demon snake tail, and usually with a vulture for transportation, without ahead. It drives people towards spiritualism and enlightenment and frees people from worldly desires. Vedic astrology suggests that Ketu is the representation of karmic collections both good and bad, spirituality, and supernatural influences. Ketu rules over abdomen and claws.

Ill placement can lead to a lack of confidence, concentration, stomach related issues.

Did You Know These Hidden Facts About the Navagraha’s? 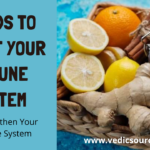 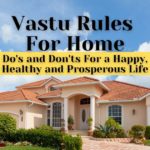