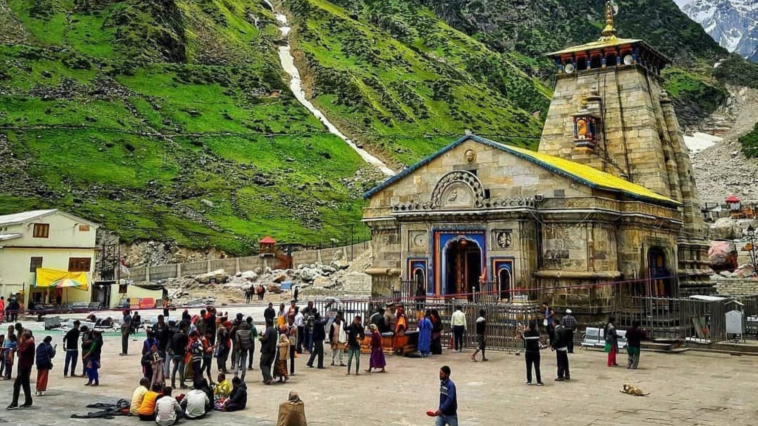 The Sanskrit compound of “Jyoti” which means divine radiance and the word “linga” together formulate Jyotirlinga. These are the devotional places dedicated to lord Shiva in “Maha Shiva purana”. It mentions the presence of 64 original Jyotirlingas, 12 of which are the most sacred ones and are called Maha Jyotirlingam. These 12 Jyotirlingas are present over different locations in India starting from Kedarnath in north to Rameshwaram in south, representing the entire diversity of India.
The feeling of being near God, the spiritual awakening, the massive divinity in air you will feel there is all you will need. The shower of blessings, the mesmerising views, peaceful environment and everything there will help you guide your spirit through all the problems of your life. Besides, the knowledge of rich diverse cultures of native places will leave you astonished. Hence planning on a spiritual ride and not visiting these sites can never be a thing. You can choose your destination and rest all is your way to the almighty.

Here is the list of the 12 Jyotirlingas with other information. Cover all the destinations you need. 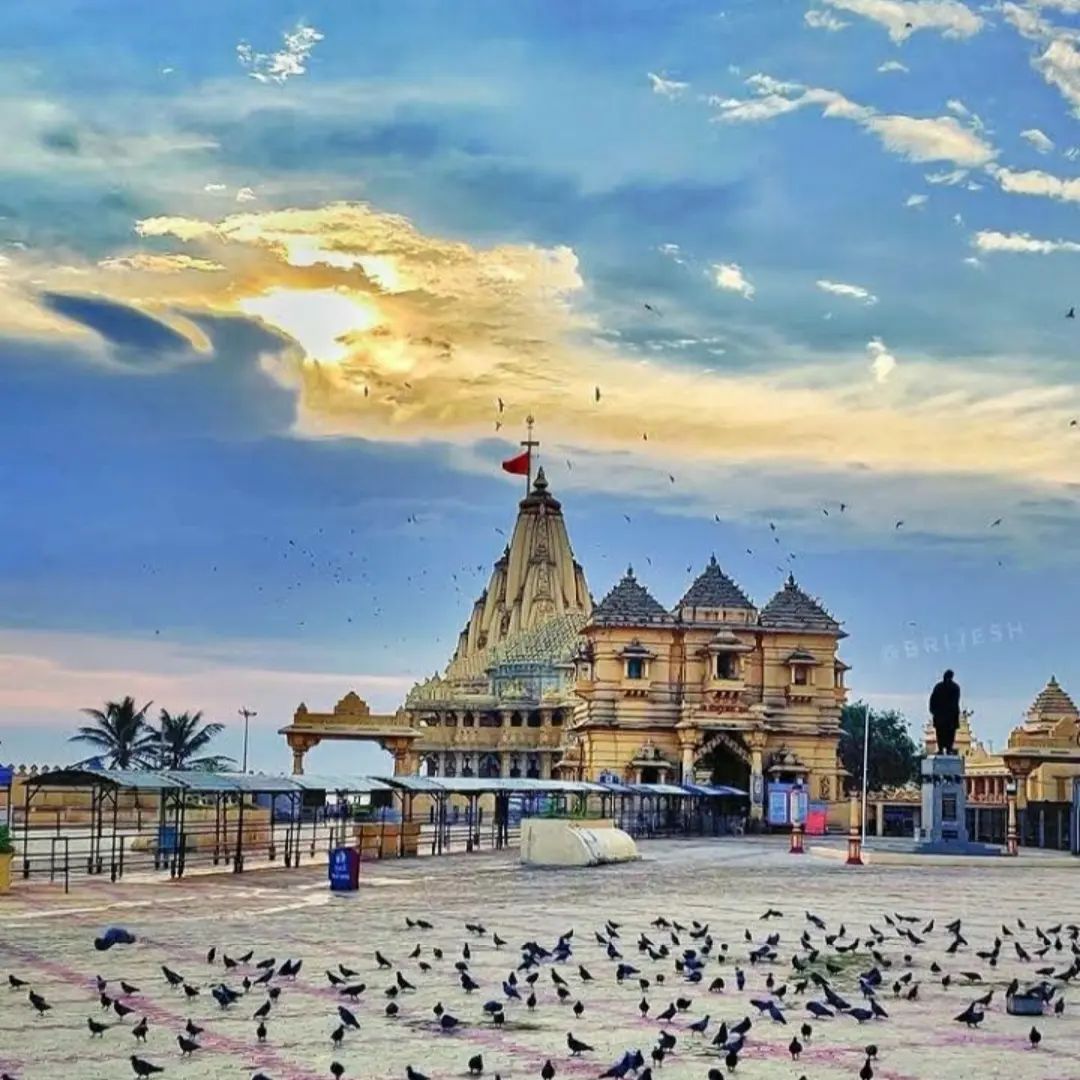 One of the most famous and regarded as the first among the twelve Aadi jyotirlingas is the also one of the most worshiped sites. The beautiful architecture of the temple resembles Chalukya style, an ancient dynasty style. Lord Shiva is believed to have appeared here as column of bright light, lighting up the whole place. Shiva purana describes the story of the temple as Moon got cursed for ignoring all his 26 wives except Rohini, who were all daughters of Dakshin Prajapati. In order to remove the effect of curse given by his father-in-law and shine again, he started worshipping Lord Shiva. Being the protector of his devotees Lord Shiva granted his wish and resided in Somnath for an eternity. In Indian history this temple has been attacked by Mahmud Ghazni over 17 times for robbing the it’s precious jewelries and other things. Hence it has also been a historical site and attraction to tourists.

TEMPLE HOURS: Temple opens every day at 6am, aarti is done at 7am, 12 noon and 7pm and finally closed at 9 pm. The famous light and sound show, “jai Somnath” occurs between 8 to 9pm.

TRAVEL GUIDE: The nearest railway station is Veraval station located at just 5Km from Somnath. The place has plenty of cabs and auto rikshaws to travel through this distance. 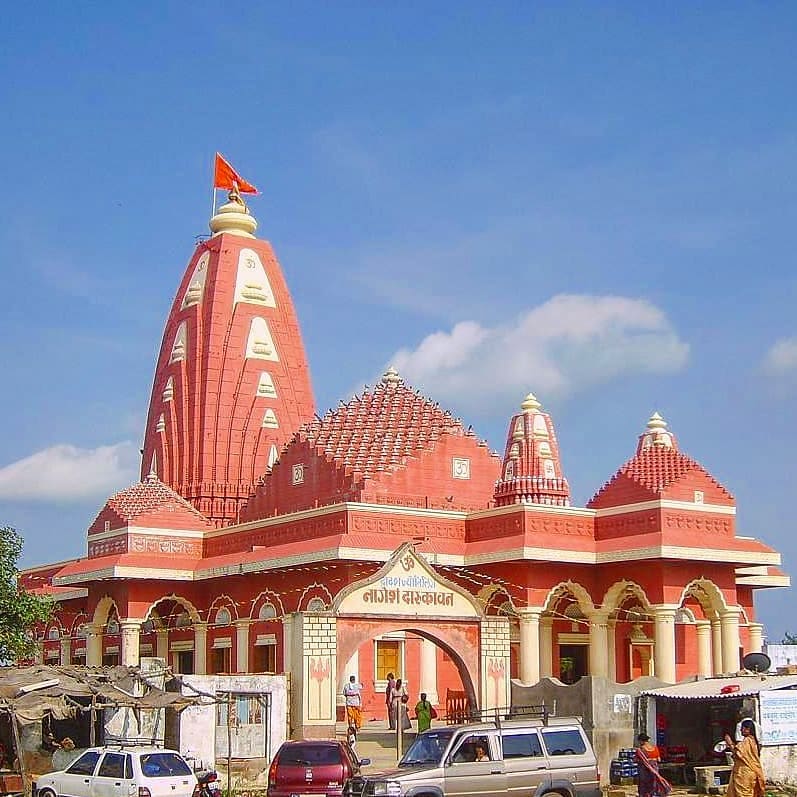 On the coast of Saurashtra in Gujarat lies the Nageshwar temple. This underground sanctum gets visited by millions of devotees throughout the year seeking the blessing from Nageshwar Mahadev. Devotees here are enchanted by 25-m tall statue of Lord Shiva along big open gardens and striking view of Arabian sea. Remarkably this place symbolises protection of all types of poisons.

The name comes from the river Bhima on whose bank the temple lies. This temple is a masterpiece build out of black rock with Nagara architectural pattern. Bhima from Mahabharat, according to believes, had a son named Kumbhakarna who build the Jyotirlinga. Later in 13th century it’s Sabha mandap was created and in 18th century the endowments of the temple were built to facilitate worship services. Another attraction of the place is Kamalaja temple, known for incarnation of Mata Parvati.

TEMPLE HOURS: Darshan starts at 5 am and carries on till 9:30 pm. Visit is restricted in between for 45 minutes for Madhyan aarti.

TRAVEL GUIDE: The nearest railway station is Karjat junction at 168Km distance. The remaining distance is meant to be covered by local buses or auto rikshaws. 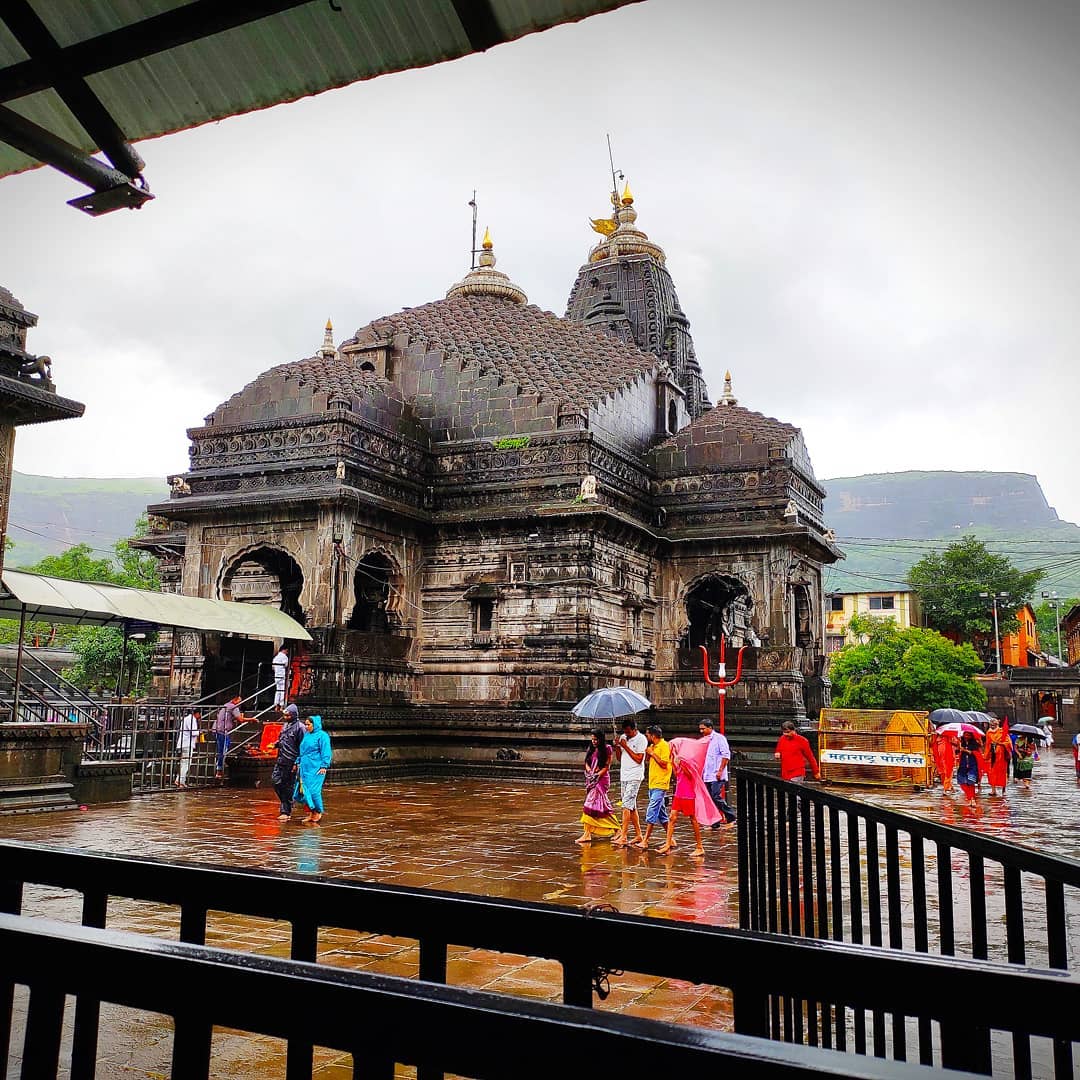 Near Brahmagiri mountain lies the holy temple of Trimbakeshwar. Nearby flows Godavari river. Shiva Purana says river Godavari and Gautami Rishi pleaded Lord Shiva to reside here. Lord Shiva accepted and emerged in the form of Trimbakeshwar. The shape of the Jyotirlinga is the most unique part here. It consists of a void with three pillars representing God Brahma, God Vishnu and God Maheshwara.

TEMPLE HOURS: Visiting is allowed between 5:30am and 9pm, all days of the week.

TRAVEL GUIDE: Nearest railway station is Igatpuri station and nearest airport is Chhatrapati Shivaji international airport. The place can be reached via road too. 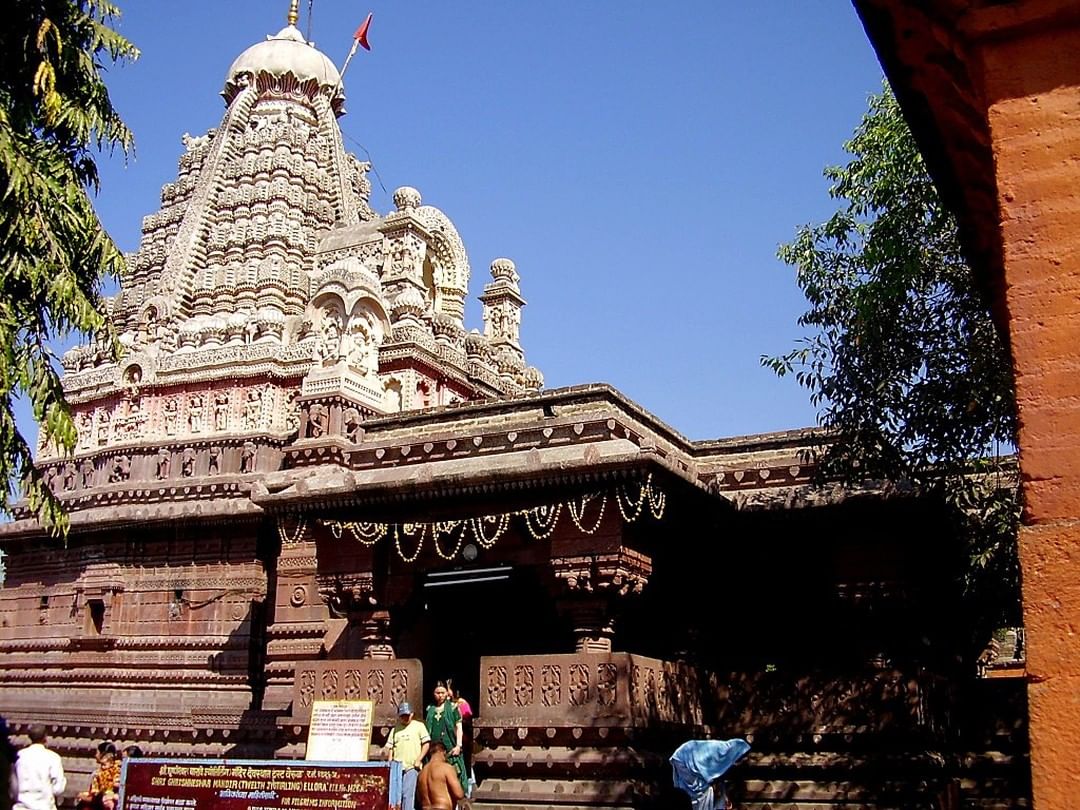 Grishneshwar is the smallest of the Jyotirlingas and is considered the last or the 12th Jyotirlingas of India. A five-story Shikhara style building red rock temple has carvings of Gods and Goddesses along with a huge Nandi Bull in the main hall. Located nearby are the cave of Ajanta and Ellora. It was built by Ahilyabai Holkar. This temple is also known as Gru Someswara and Kusum Eswarar. Visitors are often taken aback by the massive sculpture of Vishnu Dashavtar, carved on red rock.

TEMPLE HOURS: Visiting and worship is allowed between 5:30 am and 9:30 pm. In Shravana month visiting can be between 3pm to 11pm due to huge footfalls.

TRAVEL GUIDE: Delhi has direct trains and flights to this place. Aurangabad can be reached from anywhere in India through flights.

Jyotirlingas in east and central India- 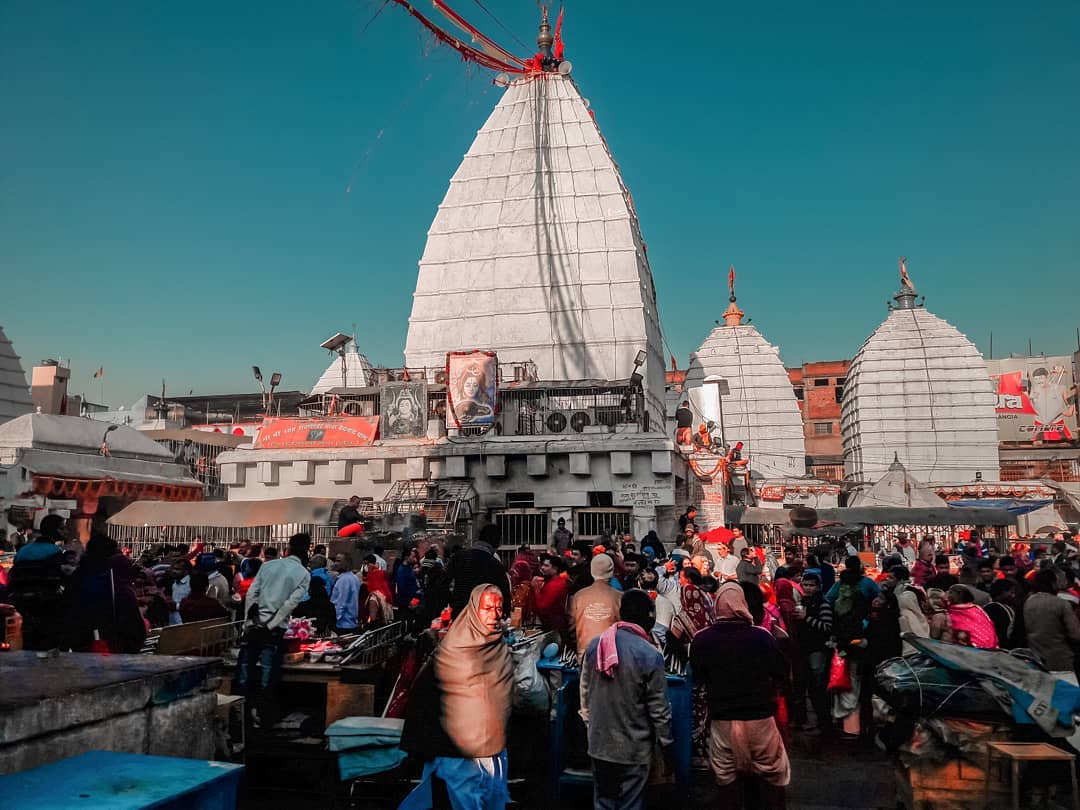 Mythological Ravana from Ramayan worshipped Lord Shiva for years and invited him to Lanka. Lord Shiva showed up as a linga and asked Ravana not to drop him till he reaches Lanka, but Ravana dropped the linga here in Deogarh and the jyotirlinga since then is present and worshipped here.
Vishnu influenced Ravana to have some rest and drop the jyotirlinga for some time. Worshipping here during the month of Shravana helps people cope with their miseries.

Vaidyanath is also considered to be one of the 52 Shakti Pitha shrines of Sati. Goddess Parvathi temple is tied up with the main Temple, with huge Red Sacred Threads (Paag) which is unique and worthy for reverence, showing the Unity of Shiva and Shakti.

TEMPLE HOURS: The temple is open from 4am to 3:30pm and 6pm to 9pm every day. During special occasions visiting timings are increased.

TRAVEL GUIDE: Nearest railway station is Jasidh junction. The temple is just 15Kms from station and can be reached by local cabs and buses. 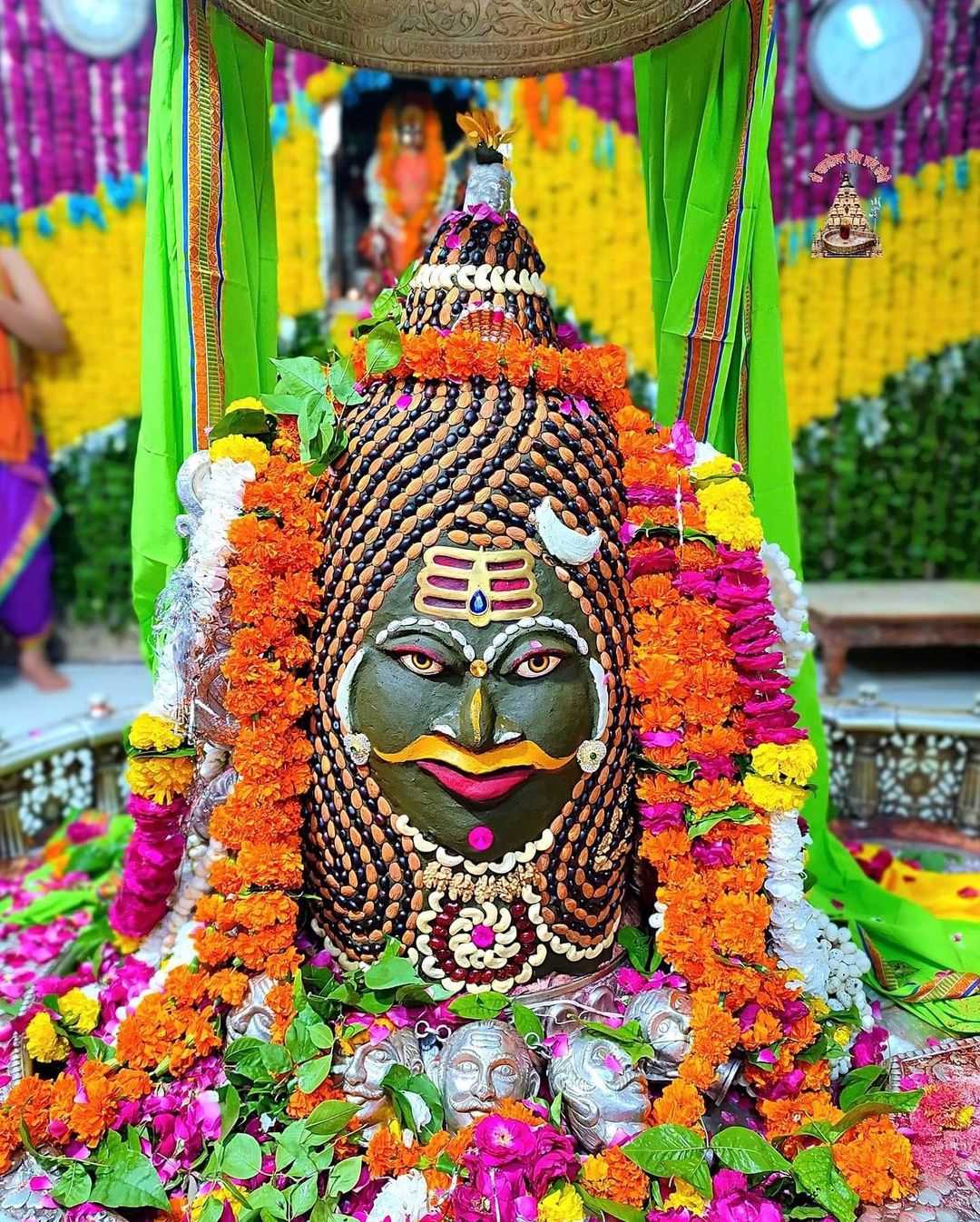 Mahakaleshwar Temple is located on the banks of the Kshipra River, Lord Mahakal is a fierce form of Shiva. In the dense Mahakal forest in Ujjain, Madhya Pradesh. This Jyotirlinga in Madhya Pradesh is an important pilgrimage site in Central India. There are a number of legends related to how this Jyotirlinga came into existence. According to the Puranas, there was a five-year-old boy Shrikar who was enthralled by the devotion of King Chandrasena of Ujjain towards Lord Shiva. Shrikar took a stone and started worshipping as Shiva. Many people tried to dissuade him in different ways, but his devotion kept growing. Pleased by his devotion, Lord Shiva assumed the form of a Jyotirlinga and resided in the Mahakal forest. The Mahakaleshwar Temple is considered significant by the Hindus for another reason. This is one of the seven Mukti-Sthalas – places that can free one from suffering

TEMPLE HOURS: Devotees can visit in between 8am and 5am and again between 6 to pm and lastly between 8 to 11pm.

TRAVEL GUIDE: Nearest airport is in Indore which is 51 Km from temple. Nearest railway stations are Ujjain junction, Chintaman, Vikram Nagar and Pingaleshwar.

The Lord of the sacred sound Om is the Omkareshwar. It is situated along the bank of Naramada on an island called Shivapuri. According to believes once there was a war between Devtas (Gods) and Danavas (demons). The Devtas prayed Lord Shiva for victory and because of that got triumph over the evils.

TRAVEL GUIDE: Ujjain and Indore are the nearest airports at a distance of 133Km and 77Km. The nearest railway station is Indore at 77Km distance. 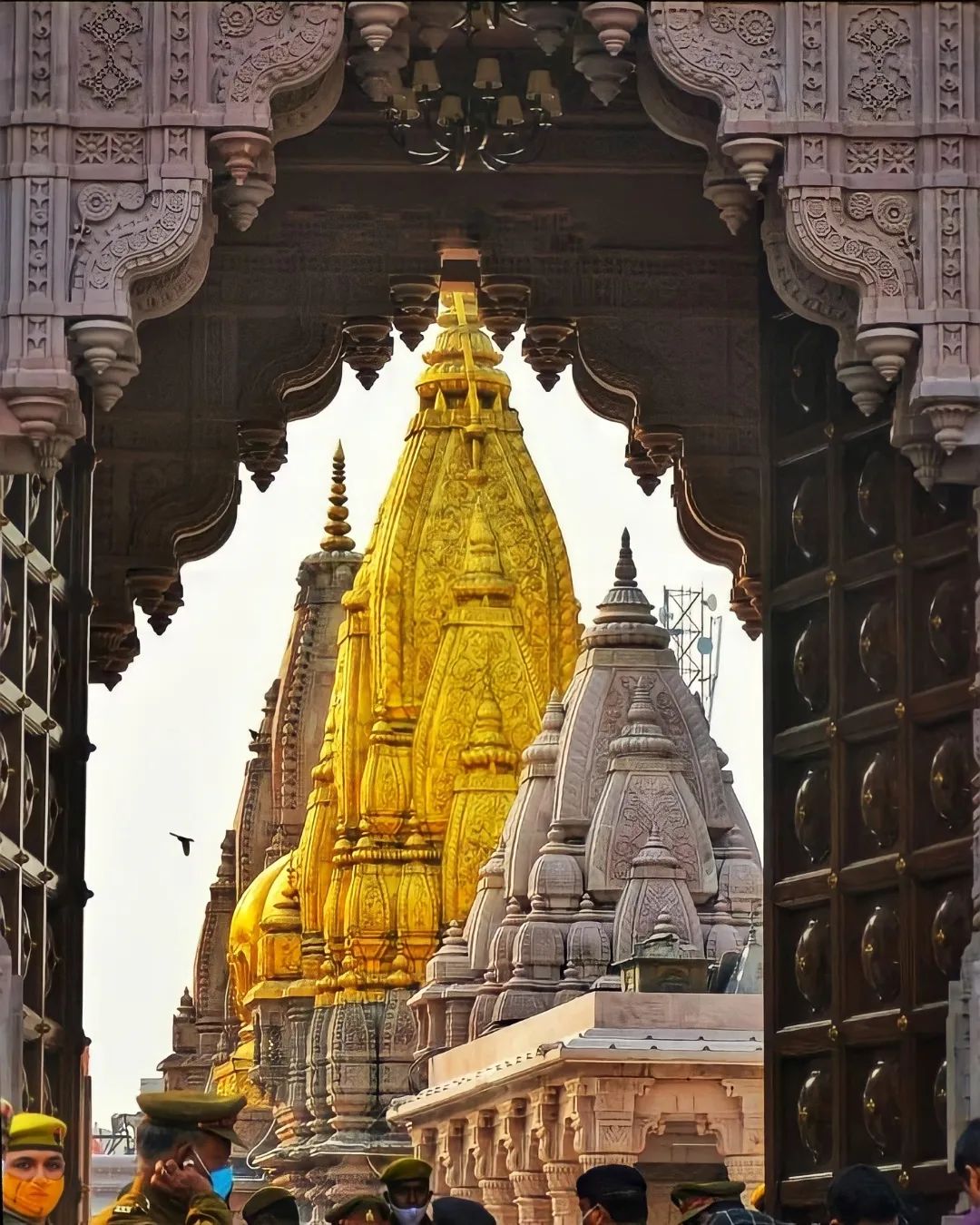 Constructed by Ahilyabai Holkar in 1780 is the renowned Golden temple of Varanasi. Popular believes say that Lord Shiva resided here and offered liberation and happiness to everyone. It is considered as the first jyotirlinga to overpower other Gods and move towards heaven by breaking Earth’s surface.

TEMPLE HOURS: The temple is open between 3am to 11pm. The temple schedules are-

TRAVEL GUIDE: Varanasi is the nearest railway station but there are stations nearby. 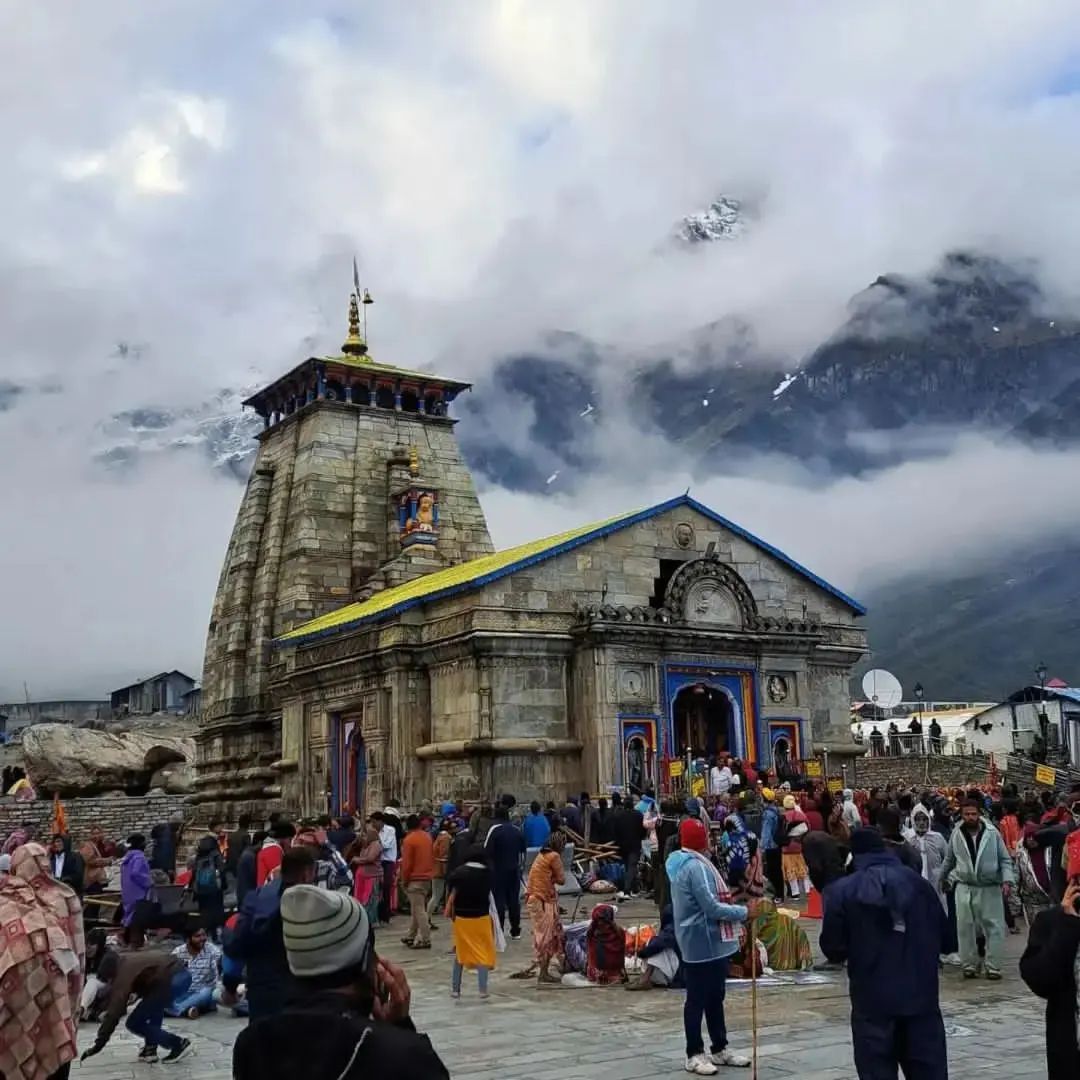 In the Rudra Himalaya ranges, at an altitude of 1200 feet lies the divine Kedarnath jyotirlinga. Being considered as one of the four Dhams in Hindu religion Extreme weather and snowfall leads to closing of the temple in winter and opens only in May to June. Devotees first visit Gangotri and Yamunotri to take holy water and offer it in Kedarnath.
Devotees believe that bathing the Shivalinga here can help you get rid of sorrows and miseries. The samadhi of Guru Shankaracharya located just near the temple is another site of tourist attraction.

TEMPLE HOURS: 4am to 12 in the noon and 3pm to 9pm are the visiting hours for devotees.

TRAVEL GUIDE: The nearest airport is Jolly grant while Rishikesh is the nearest railway station. The nearest road is Gaurkund from where you can trek to Kedarnath. 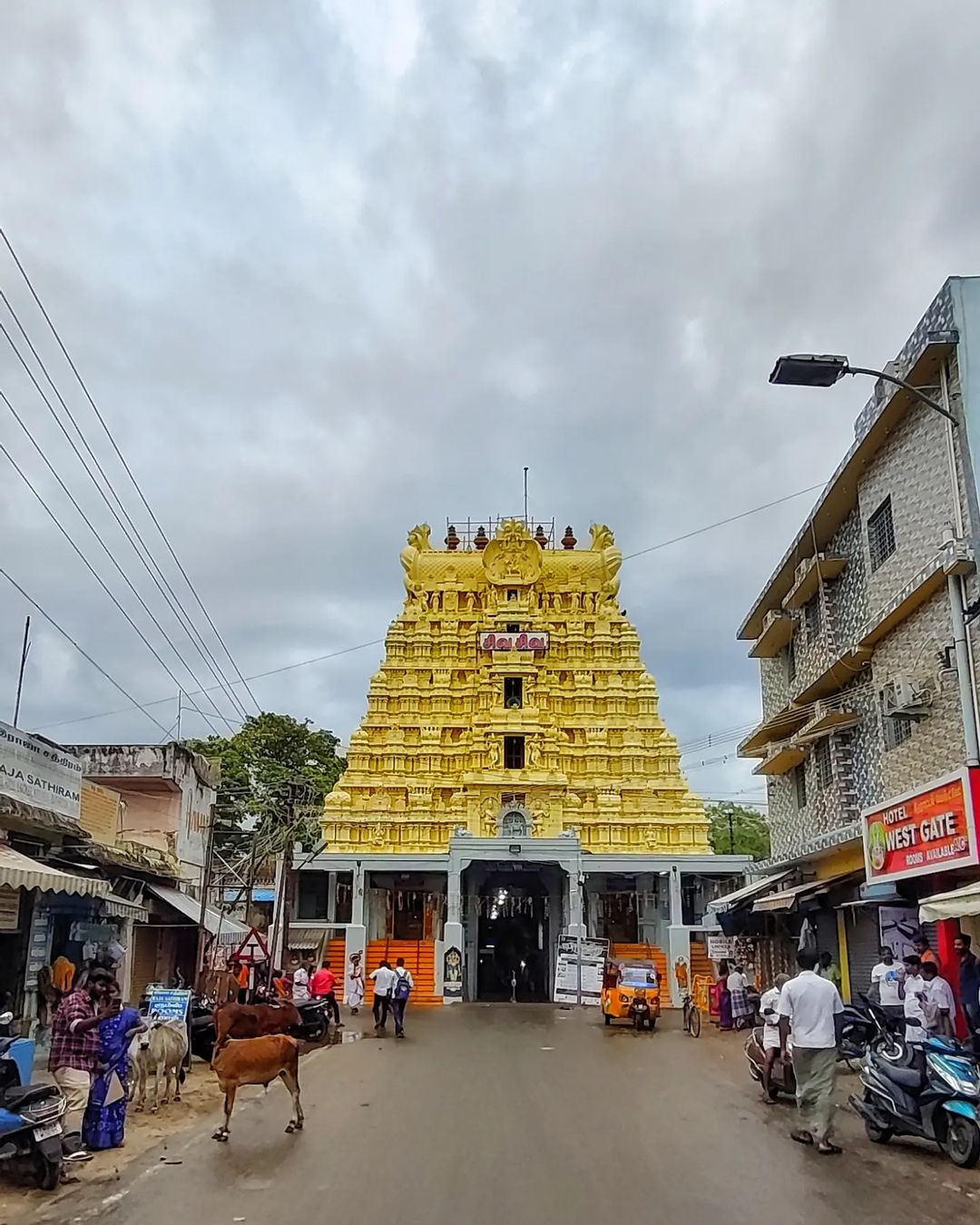 This jyotirlinga is believed to be worshipped by Lord Rama after his victory over Ravana. Surrounded by sea on all sides, this temple lies at the southern most point of India.
Another site here visited a lot is Dhanuskodi beach from where Ram setu was built to save Sita mata. This is also one of the char dhams in India.

TEMPLE HOURS: 5am to 1 pm and 3pm to 8pm are the devotees visiting time.

TRAVEL GUIDE: the nearest airport is in Madurai which is 163 Km away from destination. It is also connected to Chennai via trains.

Sri Bhramaramba Mallikarjuna Temple or Srisailam Temple is a Hindu temple dedicated to the deities Shiva and Parvati, located at Srisailam in Indian state of Andhra Pradesh. The legend is that Kumar Kartikeya, the younger son of Lord Shiva once got angry and came to the Kronch Hills from Kailash. Lord Shiva and Maa Parvati came here and stayed on with the name Arjun and Mallika. Thus the place and the temple were called Mallikarjun.

The temple complex covers 2 hectares and houses four gateway towers known as gopurams.
The shrine where Mallikarjuna is housed is considered the oldest in the temple, dating back to the 7th century. There is a Sahasra linga (1000 linga), believed to have been commissioned by Rama and five other lingams believed to have been commissioned by Pandavas.

TRAVEL GUIDE: Nearby road trips can be taken from towns of Doranala, Markapur and Kurichedu. Markapur is the nearest railway station. 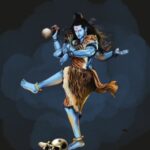